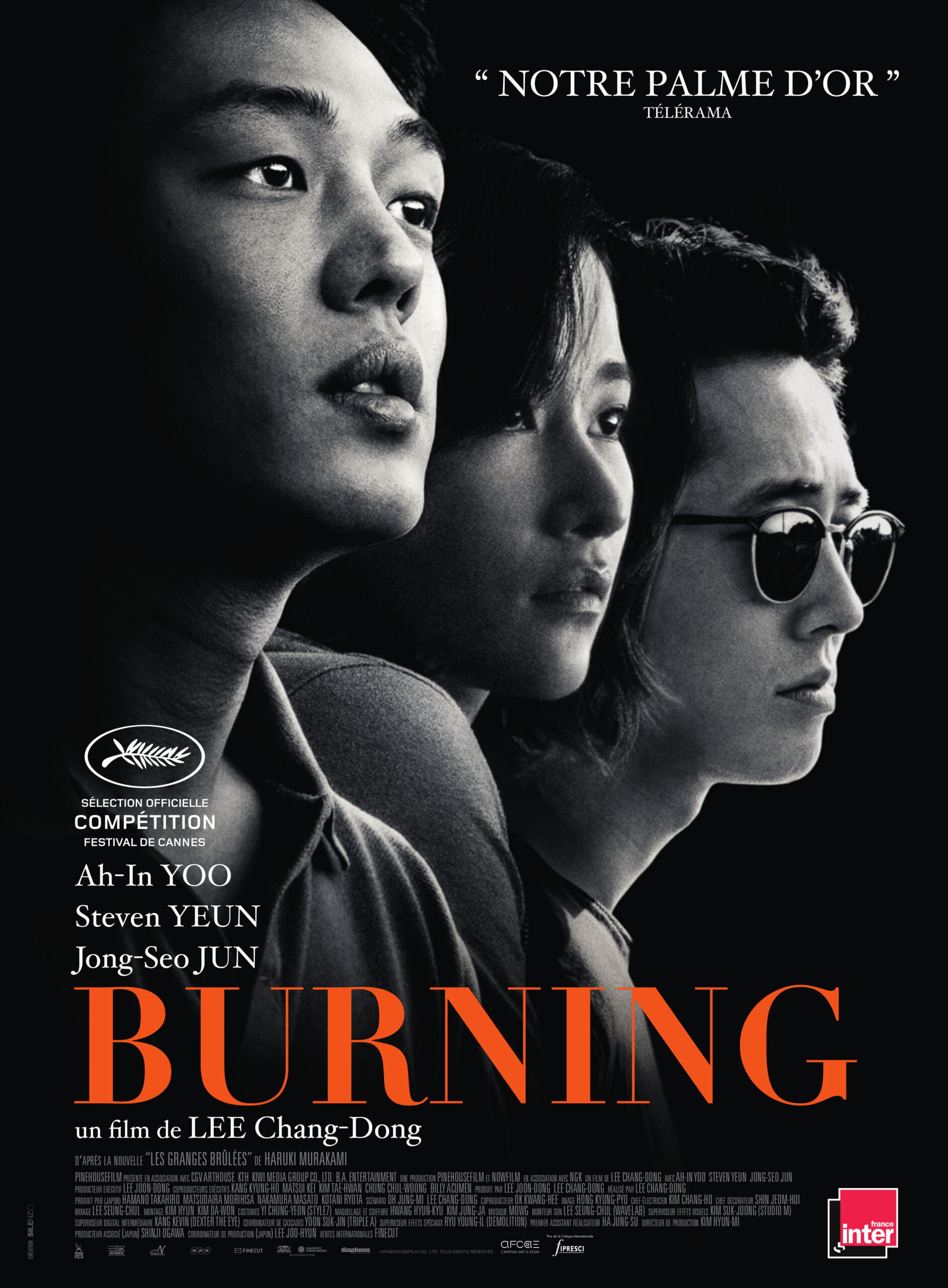 Burning is a 2018 South Korean movie of the psychological thriller genre. It premiered in the prestigious 2018 Cannes Film Festival. It has won critical acclaim worldwide and even went on to win the entry for Best Foreign language movie at the 91st Academy Awards. Based on the short stories “Barn Burning” from The Elephant Vanishes by the Japanese author Haruki Murakami that was released around the late 80’s and short story “Barn Burning” by William Faulkner that was released way back in 1939.

Yoo Ah in is an aspiring writer; Lee Jong-su who does delivery jobs for a living. He meets his childhood friend Shin Hae-mi, played by Jeon Jong-seo. She recognizes him and reminds him of how they lived in the same locality during childhood.

Hae-mi plans to go to Africa for a short trip and requests Jong-su to feed her cat in her apartment, while she is away. Both, go to Hae-mi’s unkept apartment and get physically intimate. This leaves Jong-su yearning for her after she leaves for her trip. He diligently goes to Hae-mi’s apartment to feed the cat, which never shows itself. But the cat’s feces and empty food container assure Jong-su, that the cat is very much there in the apartment. When Hae-mi returns from Africa, she has a wealthy man named Ben (played by Steven Yeun) by her side. She confirms that she got close to Ben, as both were stranded in the Nairobi airport, due to a local shooting.

Jong-su is jealous of Ben, as he is better than him financially. There are unusual meetings between the three- and one-day Hae-mi disappears without a trace. Jong-su suspects Ben to be the culprit and starts stalking him for evidence. Does Hae-mi return or is Jong-su blinded by his jealousy, makes the plot of this 2-and-a-half-hour Korean movie.

This Korean movie starts off as a usual movie of boy meets girl but under non-glamorous circumstances. This immediately gives you the feel that it is not your regular popcorn cinema. The initial plot of the movie is set quickly, and you witness the love triangle of sorts between the three protagonists. The plot focuses on a few scenarios like Jong-su gifting Hae-mi a pink watch that he wins at a raffle, that she wears throughout the movie. Then, there is the feeding of the cat, that seems imaginary for it does not show itself at all. Finally, there is a serious dialogue where Ben talks about burning down greenhouses as a hobby. The screenplay develops around these references only.

The initial plot is in a medium pace and then, it becomes extremely slow. The movie talks about how Jong-su’s farmhouse is located close to North Korea. Jong-su appreciates the freedom he has in South Korea, something his neighbouring citizens may not. However, he does not understand how to define freedom, as there is a disparity between rich and poor in South Korea. For, his crush Hae-mi has had casual sex with him but is now interested in the rich and classy looking Ben.

This Korean movie is a way too slow pace and has a mediocre plot. It has a sad tone to it. It shows South Korea in a non-glamorous light. This is something opposite to what we usually see in Korean dramas. Overall, it seems to be a movie for the Critics and not for a general audience.

Steven Yeun’s acting is impressive as the rich and mysterious love interest of the leading lady Jeon Jong-Seo. Yoo Ah in delivers another stellar performance! Jeon Jong-Seo does well and makes you think that she is a seasoned actress, not a newcomer. If you are still curious about what the whole critical acclamation was about, you might want to watch it; else give it a miss!